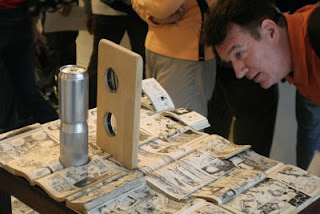 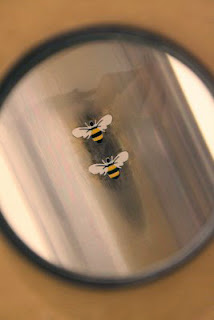 (Top) A visitor peers through a magnifying glass in Tang Kwok Hin’s assemblage to get a closer look. (Bottom) A pair of honey bees could are left behind on one of Tang Kwok Hin’s beer cans. (The Earth Crust, by Tang Kwok Hin, 2008)

Mini art was a major talking point during Fotanian Open Studios in Hong Kong over the two weekends of Jan 2008.

The crowd pleaser was surely Esther Yip’s collection of toylike figurines, with their sheer number (about 800 pieces in all), minute size (ranging from 1 to 4cm in height each) and chirpy colours. Esther also exhibited a kinetic piece, a box-set featuring Barbie trying her hands at the traditional guzheng instrument. Similarly small but less in number, Suki Chan’s floor installation of black houses got viewers to feel psychologically bigger, much like Gulliver, and to reflect on personal and collectives memories. The other architectural model in the show was by Chun Kai Feng: It featured a small-scale model of van Gogh’s bedroom in Arles, reflecting an artist’s constant struggle to be an individual nonetheless concerned with the larger community.

Two-dimensional art was given new spins by several participants of the show. Chow Chun-fai has painted key frames from an excerpt off the film Infernal Affairs as miniature stills, which he then reconstructed into a lo-fi animation. Shown for the first time on a mini-monitor whose screen size matched the dimensions of his paintings, the work focused the visitors attention on layers of visual and audio information about urban life. Debbie Hill uses chewing gum as her canvas for her painting of portraits of stars who have gotten into trouble, e.g., Britney Spears, questioning if we often subject public figures to higher standard of morality. Cornelia Erdmann’s drawings of domestic furniture on slides were noticeable only to the attentive and patient visitors. Installed onto flourescent tubes on the studio’s ceiling, the work also required viewers to stretch their bodies to scrutinise details. Tang Kwok Hin’s assemblage featured tiny figures, some of which were left behind after he sanded beer cans of their labels, others cut out from comics he laid into a landscape. Michael Lee brought photographs off the wall and the book by fixing hundreds of self-portrait cutouts onto the architectural elements of the exhibition space.

This show also brought in practitioners not steeped in the visual arts circle. Known more for his comics and illustrations, Chihoi shown a small book handmade from a single piece of A4-size paper and a single piece of thread. Full-time miniaturist Li Loi-yau proved that in this age of speed, technology and online-shopping, it is still important to make highly personalized gifts for people who matter: She exhibited a miniature sports shop which she made over a few years for her son. Sound artist Sid:Ned set up his compilation of one-minute “schizophrenic sounds” as an interactive piece with which audiences may select tracks to listen in to.

The notion that “small is big” was most visible apparent with ahuge crowd gathering to watch Justin Wong’s animation piece on the tiny screen of an iPod. In it, audiences were treated to ten dreamlike sequences in which big-size and small-size people meet.Eniminiminimos was positively reviewed in numerous publications including Ming Pao Daily, Ming Pao Weekly, Sunday Morning Post, Weekend Weekly, Take Me Home, Singa Tao Daily, Hong Kong Economic Daily and Apple Daily. Studio Bibliothèque was one of 34 studios that opened their doors to the public over the same period in the annual Fotanian: Fotan Artists Open Studios event. Some 4500 members of the public visited the event this year.