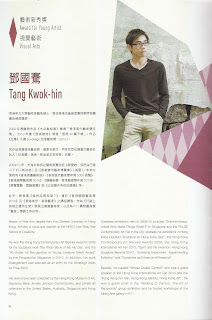 Master of Fine Arts degree from the Chinese University of Hong Kong, formerly a visual arts teacher at the HKICC Lee Shau Kee School of Creativity.

He won Hong Kong Contemporary Art Biennial Award in 2009 for his sculptural work The Photo Book of Mu Mu Dao, and the “40 Under 40 Award” by the Perspective Magazine in 2010.  In addition, his work Entanglement was selected as an entry for the Sovereign Asian Art Prize 2010.

His works have been collected by the Hong Kong Museum of Art, Deutsche Bank, Amelia Johnson Contemporary, and private art collectors in the United States, Australia, Singapore and Hong Kong.

Besides, he curated “Whose Quality Control?” and was a guest speaker at the Hong Kong International Art Fair 2010 and the “Hong Kong Art Talk: Hong Kong Identity, Hong Kong Art”. He was a guest artist in the “Walking to Canton, The Art of Reciprocity” group exhibition, and he hosted workshops at the Hiking Arte gallery in K11.

“If I were to sum up my work in a phrase, it would be ‘a synthesis of symbols’ or ‘a collage of symbols’. I deal with a wide range of topics, most of which are harvested from everyday life with the aim of evincing the binary opposition between nature and urban development,” said Tang. Growing up in a walled village in the countryside, he feels compelled to voice his opinion about the hectic pace of the city, and how ideals are abandoned in favour of wants. “Works of art can make a noise in society, even if they cannot change anything directly,” he explained.

One piece of work from 2009/10 is particularly memorable and endearing for Tang. It is Fields behind Landscape, a large-scale installation and tribute to Professor Lui Chun-kwong. In homage to the cyclical imagery of things that come full circle in the professor’s landscape paintings, the artist used paper to cast and replicate small plots of soil that – hiding behind a landscape painting – give the vision of endless ploughed fields. By planting in the “fields”, the artist has attempted to retell a story and reveal the metaphor contained in it. Consisting of an assortment of snack food packages, Energy Loss Cabinet is the artist’s musing on fast-food culture, consumerism and life values.

The Photo Book of Mu Mu Dao is a composite of 100 Googled images, which the artist printed out and stuck on glass planes for further sculpting. It’s a thought-provoking process in more ways than one that involves delving into the roles popular search engines play in an age of visual overload, and how our perceptions of the world are constricted and defined by exposure to essentially the same diet of images.

Tang jokingly said that Lady Luck never seemed to favour him until his award-winning streak began recently. The awards give him tremendous encouragement and they fill him with gratitude. Beginning a new chapter as a full-time artist this year, he plans to devote more time to going on study tours or enrolling in short-term artist-in-residency programmes. “I like Hong Kong. It’s where my roots lie. But venturing outside my world will bring me different perspectives and new ways of doing things,” he said.

The artist also wants to take Hong Kong art outside its home territory. “I’ve seen some notable exhibitions overseas, and I realise Hong Kong artists are just as good as their international counterparts. One of the biggest constraints Hong Kong artists face, though, is physical space. It’s virtually impossible to create large-scale pieces here. Of course, the lack of funds doesn’t help either,” he remarked. Despite these limitations, there’s no shortage of art pieces that are small in scale yet with a deep potential impact. “Hong Kong is a unique city. It’s a cultural melting pot where a constant influx of ideas from the outside world become inextricably woven into the fabric of our art,’ he said.

Dedicated to promoting art, Tang is a regular speaker at educational talks and seminars. He encourages young artists to hold on to their dreams. “For financial reasons, artists may choose to do a lot of graphic work, such as paintings, without realising that such work might take over their creative imaginations and steer them away from their purpose. I can’t stress enough how important it is for artists to work hard to find their own place in art, to voice their own opinions instead of focusing on the financial aspects of art.” Acknowledging that this takes nerves of steel. Tang advises fellow artists to seek alternative avenues, such as applying for grants and entering competitions, and whatever else is needed to realise their art fully.

A very active young visual artist, Tang Kwok-hin devotes himself enthusiastically to a wide range of artistic activities that encompass creative, curatorial and teaching projects. Individual exhibitions aside, he also participated in an array of joint exhibitions and cultural exchanges, both at home and abroad, during 2009/10. By deconstructing and reconstructing symbols and texts that are in common currency, his works respond to modern living, the world of the Internet, and the ties between the two. He is a prolific artist who takes pride in professional quality and personal style, producing works of substance and making bold moves. Brimming over with creative energy and potential, he is a promising talent among the new crop of artists.