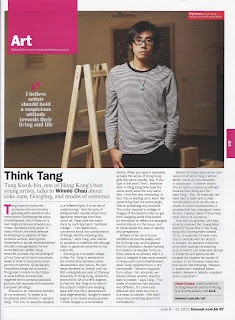 Tang Kwok-hin looks like someone who would easily get away with vandalism at a crime scene. Eschewing the looks of a delinquent, the 27-year-old’s seemingly innocuous artworks are, in fact, decidedly iconoclastic. In many of them, the artist defaces by stripping his subjects of their symbolic surface, leaving their trademarks or social representations virtually unrecognisable. For the work titled Can (2008), Tang removed, by hand, the red coating of a Coca Cola can (it took him a whole week) in order to lay bare its silver aluminium exterior. Quite literally, Tang takes things out of context. The generic monotone illustration on wine bottles, for example, triggered him to construct pastoral pictures that resonate with medieval European paintings.

“Erasure is an important element [in my artworks]. To erase is to emphasise what remains,” explains Tang. “You’ll try to see [the subject] in a different light. It is an act of underscoring.” And his acts of disfigurement usually entail more figurative meanings than they scrub off. Tang calls the works done by such approach “symbolic collage”. “I am particularly concerned about the combinations of things and the meaning they produce,” says Tang, who claims to possess a notebook with enough ideas to generate artworks for his entire life.

Growing up in a walled village in Kam Tin, Tang is sensitive to the relationship between urban development and nature. He had never travelled to Central until his first undergraduate year at Chinese University of Hong Kong, where he received his BA and MFA degrees in Fine Art. But Tang is no hermit. His subject matters are keeping pace with the city’s development (and degeneration). Google’s search engine is his recent preoccupation: “I think Google is a remarkable device. When you type in keywords, actually the whole of Hong Kong gets the same results. Say, if you type in the word “tree”, everyone else in Hong Kong [who type the same word] sees the very same tree. I find this very interesting. In fact, this is leading us to learn the same thing from the same angle. This is something very powerful.” The notion inspired a collage of images of the Queen’s Pier he got from Googling some time before its demolition to reflect his strangely neutral stance on the issue, and to contemplate the idea of identity and perspective.

Visitors at his current joint exhibition at Goethe-Gallery with Ho Sin-tung may, at first glance, find his installation Bodies nothing but clusters of wooden furniture. Every piece is so pristine that it is hard to imagine it was once covered in heavy paint and embellishment, when Tang collected them in the countryside. “Wood is originally from nature. Yet, ironically, we discard [these wooden objects] back to nature,” says Tang. “The mode of existence has become very different. It’s previously attached with roots but now it is a heap of rubbish. I felt that I could say something about this contradiction.”

Behind all these destruction and deconstruction is Tang’s artistic belief, not at all inconsistently, in scepticism. “I believe artists should hold a suspicious attitude towards their living and life,” says Tang, “Say, for example, we have here a table and a chair. Combinations such as this are a result of human development, a process that has undergone many factors. I always doubt if they have other forms of existence.”

Now the young artist, who has recently received the Young Artist Award of Visual Arts in the Hong Kong Arts Development Awards 2010, is expected to have more time to wrestle with his doubts. In January, he became a full-time artist after quitting his teaching post at HKICC Lee Shau Kee School of Creativity and before he left he gave his student his words of wisdom in 16 Chinese characters that render the following: “Believe in scepticism; sceptical about beliefs. Believe in beliefs; sceptical about scepticism.”