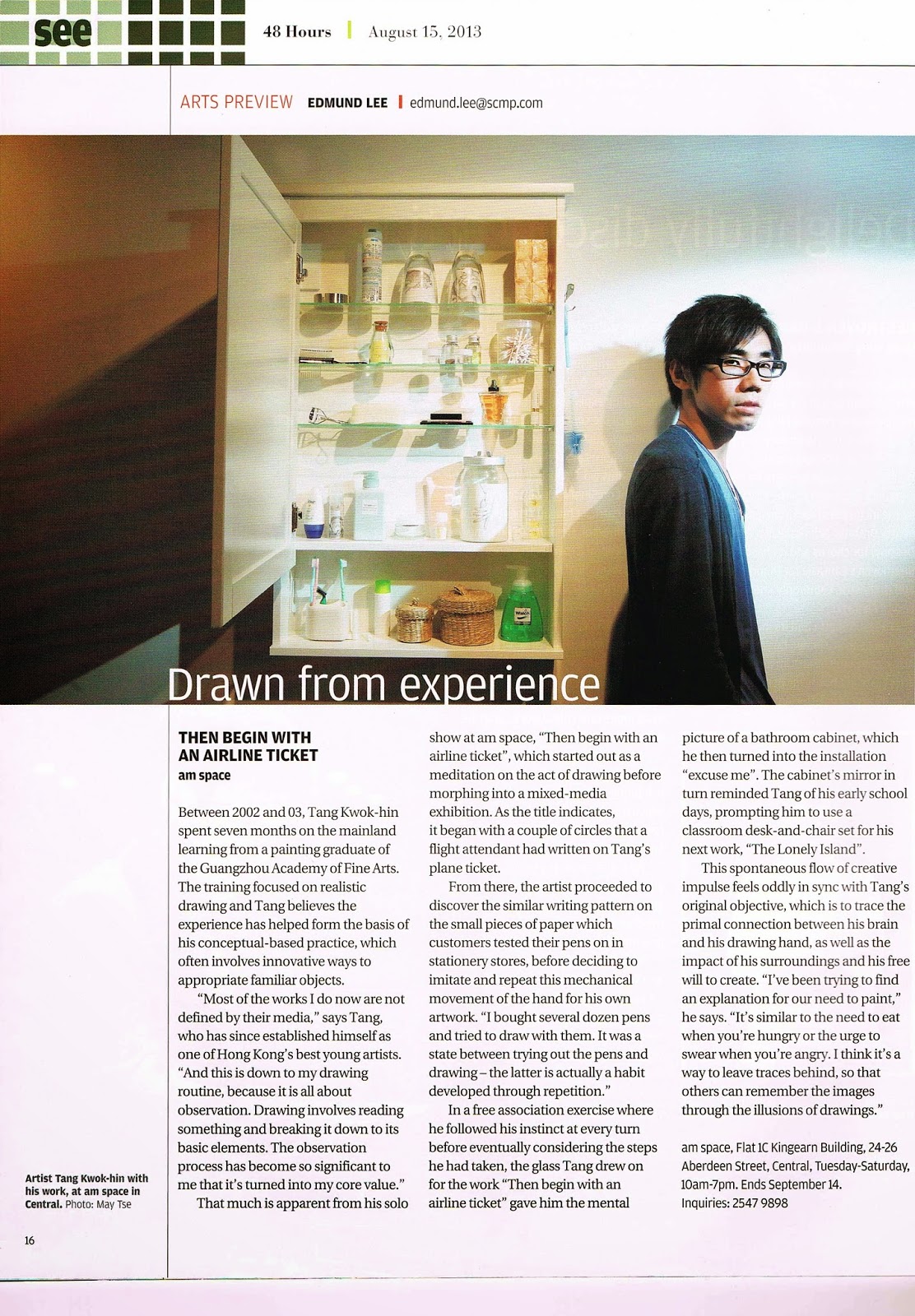 THEN BEGIN WITH AN AIRLINE TICKET
am space

Between 2002 and 03, Tang Kwok-hin spent seven months on the mainland learning from a painting graduate of the Guangzhou Academy of Fine Arts. The training focused on realistic drawing and Tang believes the experience has helped form the basis of his conceptual-based practice, which often involves innovative ways to appropriate familiar objects.

"Most of the works I do now are not defined by their media," says Tang, who has since established himself as one of Hong Kong's best young artists. "And this is down to my drawing routine, because it is all about observation. Drawing involves reading something and breaking it down to its basic elements. The observation process has become so significant to me that it's turned into my core value."

That much is apparent from his solo show at am space, "Then begin with an airline ticket", which started out as a meditation on the act of drawing before morphing into a mixed-media exhibition. As the title indicates, it began with a couple of circles that a flight attendant had written on Tang's plane ticket.

From there, the artist proceeded to discover the similar writing pattern on the small pieces of paper which customers tested their pens on in stationery stores, before deciding to imitate and repeat this mechanical movement of the hand for his own artwork. "I bought several dozen pens and tried to draw with them. It was a state between trying out the pens and drawing - the latter is actually a habit developed through repetition."

In a free association exercise where he followed his instinct at every turn before eventually considering the steps he had taken, the glass Tang drew on for the work "Then begin with an airline ticket" gave him the mental picture of a bathroom cabinet, which he then turned into the installation "excuse me". The cabinet's mirror in turn reminded Tang of his early school days, prompting him to use a classroom desk-and-chair set for his next work, "The Lonely Island".

This spontaneous flow of creative impulse feels oddly in sync with Tang's original objective, which is to trace the primal connection between his brain and his drawing hand, as well as the impact of his surroundings and his free will to create. "I've been trying to find an explanation for our need to paint," he says. "It's similar to the need to eat when you're hungry or the urge to swear when you're angry. I think it's a way to leave traces behind, so that others can remember the images through the illusions of drawings."