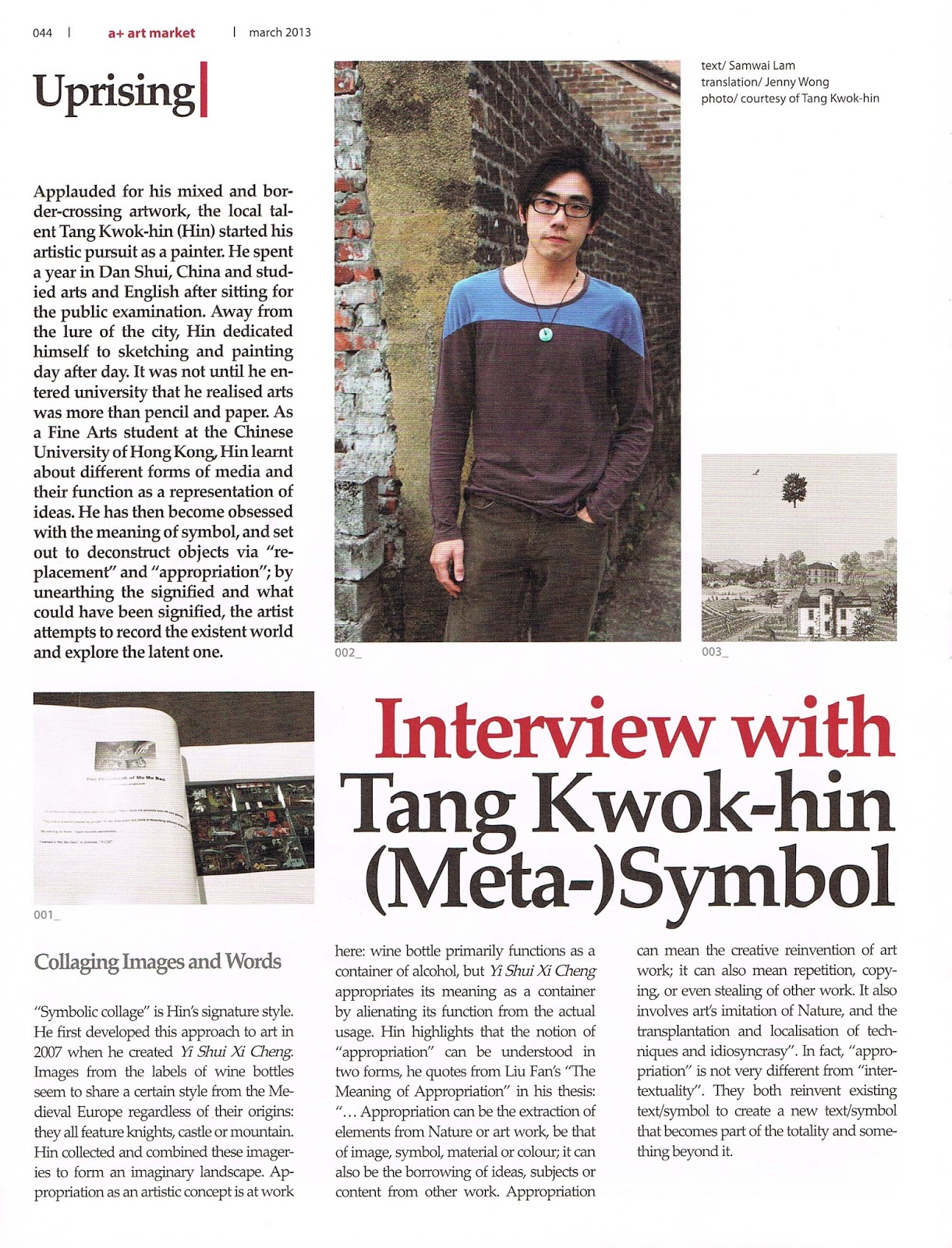 Applauded for his mixed and border-crossing artwork, the local talent Tang Kwok-hin (Hin) started his artistic pursuit as a painter. He spent a year in Dan Shui, China and studied arts and English after sitting for the public examination. Away from the lure of the city, Hin dedicated himself to sketching and painting day after day. It was not until he entered university that he realized arts was more than pencil and paper. As a Fine Arts student at the Chinese University of Hong Kong, Hin leant about different forms of media and their function as a representation of ideas. He has then become obsessed with the meaning of symbol, and set out to deconstruct objects via “replacement” and “appropriation”; by unearthing the signified and what could have been signified, the artist attempts to record the existent world and explore the latent one.

“Symbolic Collage” is Hin’s signature style. He first developed this approach to art in 2007 when he created Yi Shui Xi Cheng. Images from the labels of wine bottles seem to share a certain style from the Medieval Europe regardless of their origins: they all feature knights, castle or mountain. Hin collected and combined these imageries to form an imaginary landscape. Appropriation as an artistic concept is at work here: wine bottle primarily functions as a container of alcohol, but Yi Shui Xi Cheng appropriates its meaning as a container by alienating its function from the actual usage. Hin highlights that the notion of “appropriation” can be understood in two forms, he quotes from Liu Fan’s “The Meaning of Appropriation” in his thesis: “…Appropriation can be the extraction of elements from Nature or art work, be that of image, symbol, material or colour; it can also be the borrowing of ideas, subjects or content from other work. Appropriation can mean the creative reinvention of art work; it can also mean repetition, copying, or even stealing of other work. It also involves art’s limitation of Nature, and the transplantation and localisation of techniques and idiosyncrasy”. In fact, “appropriation” is not very different from “intertextuality”. They both reinvent existing text/symbol to create a new text/symbol that becomes part of the totality and something beyond it.

Internet is one of the important tools of appropriation. “I assume the position of ordinary citizen and their understanding of history is constructed via Internet, Google search engine, images from Wikipedia; such is the generality of things”. For instance, in order to recapture Hong Kong, Hin searched and collected hundreds of images of trees, birds or cars, all of which are ordinary things that filled tourists’ first impression of the city. Internet has dismantled all physical boundaries as Hin collected worldwide images with a click. These images belong to a world called “Mu Mu Dao”, in Chinese, it literally means the ‘island of eye and tree’; while the Chinese characters of eye and tree can form a compound which represent ‘photo’. In The Photobook of Mu Mu Dao, one can also spot the rural-urban relationship which is characterized by development, succession and tension. For example, Hin collaged images of the closing of old shop and the opening of chain stores. The “photobook” project is highly successful and the artist was awarded first prize in the Hong Kong Contemporary Art Biennial Awards 2009. Appropriation is also the bridge between personal memory and imagination. In the installation I call you Nancy, Hin imagined his unborn sister had lived and led a life in Mu Mu Dao. This imaginary work is carefully crafted, “If she was as girl, I imagined that she was Nancy. I began to search for pictures of Nancy on the Internet. This fictitious girl was born in 1984, and this photo album recorded her 25-year life. Her personality was set according to the expectation of my parents and the photos I gathered online”. There are 20 pieces of work in the collection, and the first one is the floor plan of an exhibition other works also represent fragments of the city in Nancy’s eyes. Apart from collaged image, the project also involves a video of Hin’s mother flipping the album. It is appropriation in multiple forms: it draws resources from familial and personal memory and expectation, reflects on the universal value of Internet, and displaces the meaning of symbol from its social context. A series of accidents and coincidences are drawn to the discourse of imagination, which leads to the birth of a new way of reading.

Hin describes his mode of creation as “reinventing the existent”. As the artist states in his thesis, he does not use traditional “inventive” tools to create meanings. “For the artist, this concept is different from creating from nothingness, that is, drawing on tabula rasa; ‘reinventing the existent’ means drawing on a used canvas or covering the drawn parts and disguising it as an untouched canvas. Appropriation is not limited to two-dimensional art. In the 2011 Urban Utopia: If and only if, exhibition by Ho Sin Tung and Tang Kwok Hin, Hin collected various abandoned wooden objects from ruins and garbage areas. The wooden objects were then divided into two halves and transformed into different entities: on one side, Hin removed the colour and non-wooden parts from the object, thus restoring the wood to it “original” state; on the other side, the artist “preserved” the abandoned state of the wooden object, which is a product of over-exploitation and over-consumption in modern society.

Hin’s three-dimensional work intentionally restores/preserves the originality of things so as to accentuate the social aspect of the readymade, Food Cabinets an example. For one month, he only ate and drank packaged products from Garden, a packaged food industry giant. He would then re-pack the package as if it had never been consumed. The restored package was stored in a transparent cabinet, a blatant representation of the urban myth of (over-)consumption. The meaning (or the loss of it), of these empty consumed containers is an issue Hin continues to explore.

Tang Kwok Hin is a versatile artist unrestricted by forms and genres, and his concept-based works are supported by a very cohesive and consistent attitude towards arts and society. The philosophical questions he poses resonate with the experimentation of avant-garde artists in the 1960s, as they both challenge the presumed and normalised status quo. His work speaks to the nature of art and uncannily links work of art with everyday life objects. A few decades ago, avant-garde artists declared commodity as art; in 2013 Hong Kong, Hin “(re-)appropriates the commodity and transforms it to art. Hin’s work is self-reflexive, it is more about questioning the nature of being, than a realistic portrayal of it. Such is the perpetual pursuit of the artist.