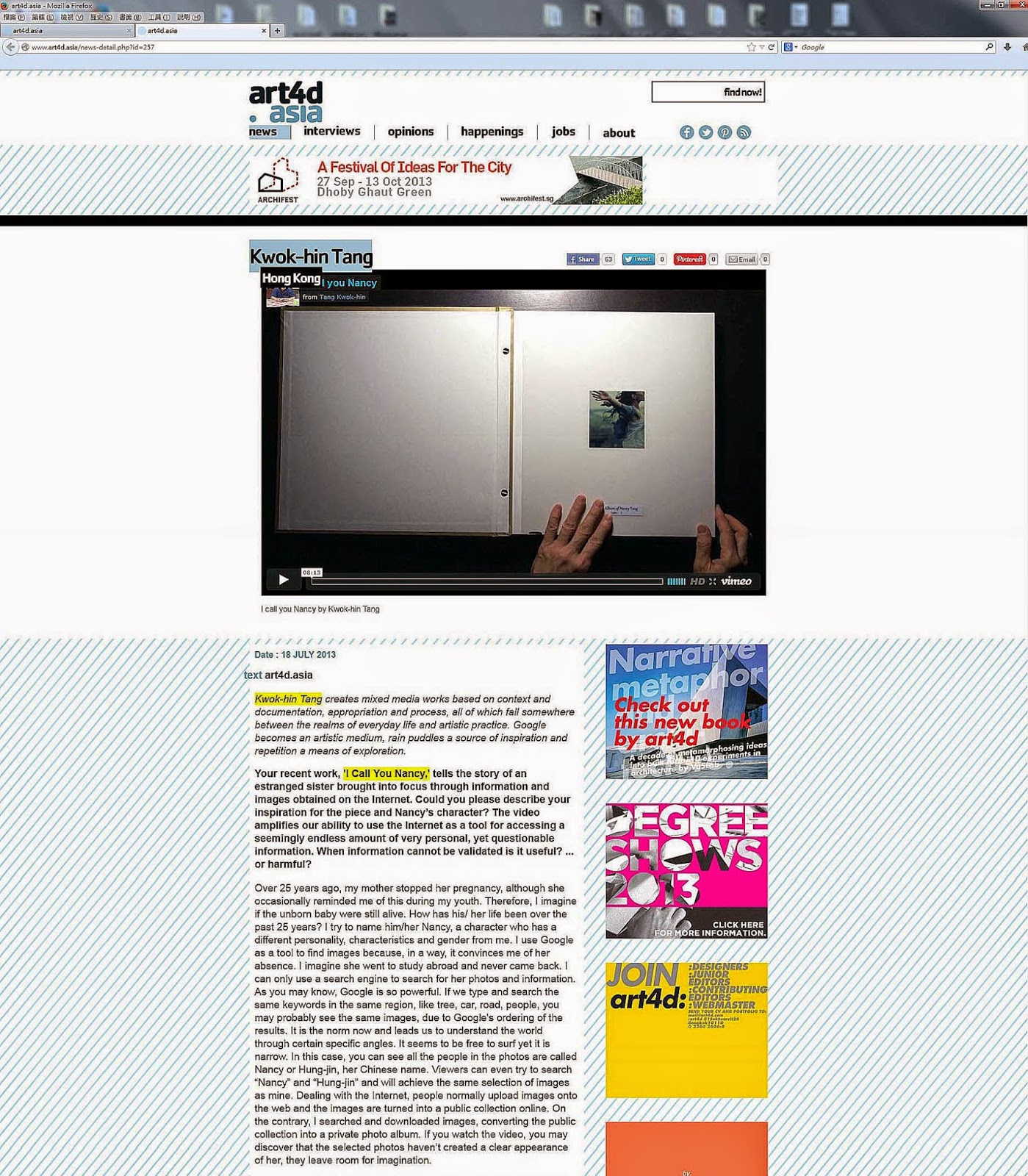 Kwok-hin Tang creates mixed media works based on context and documentation, appropriation and process, all of which fall somewhere between the realms of everyday life and artistic practice. Google becomes an artistic medium, rain puddles a source of inspiration and repetition a means of exploration.

Your recent work, 'I Call You Nancy,' tells the story of an estranged sister brought into focus through information and images obtained on the Internet. Could you please describe your inspiration for the piece and Nancy’s character? The video amplifies our ability to use the Internet as a tool for accessing a seemingly endless amount of very personal, yet questionable information. When information cannot be validated is it useful? ... or harmful?

Over 25 years ago, my mother stopped her pregnancy, although she occasionally reminded me of this during my youth. Therefore, I imagine if the unborn baby were still alive. How has his/ her life been over the past 25 years? I try to name him/her Nancy, a character who has a different personality, characteristics and gender from me. I use Google as a tool to find images because, in a way, it convinces me of her absence. I imagine she went to study abroad and never came back. I can only use a search engine to search for her photos and information. As you may know, Google is so powerful. If we type and search the same keywords in the same region, like tree, car, road, people, you may probably see the same images, due to Google's ordering of the results. It is the norm now and leads us to understand the world through certain specific angles. It seems to be free to surf yet it is narrow. In this case, you can see all the people in the photos are called Nancy or Hung-jin, her Chinese name. Viewers can even try to search “Nancy” and “Hung-jin” and will achieve the same selection of images as mine. Dealing with the Internet, people normally upload images onto the web and the images are turned into a public collection online. On the contrary, I searched and downloaded images, converting the public collection into a private photo album. If you watch the video, you may discover that the selected photos haven’t created a clear appearance of her, they leave room for imagination.

My recent projects often begin with personal issues and conclude to include wider social concerns. In my mother’s generation, their parents normally have ten kids in the family. This situation changed sharply in her generation, with the majority having only one or two children instead. The expectation of parents shifted suddenly from forming a big family to raising the next generation with a better quality of life.

Your installation, 'Before Rain After,' describes that, “man encompasses nature, and nature, in its degraded form, encompasses man.” Could you please describe the many elements of the work, from puddle to object collection, and how the installation brings elements of surroundings typically viewed as background into foreground?

I have lived in the countryside since I was born. The first time I went downtown was during my first year as an undergraduate. I went out for an exhibition opening. At that time, I was shocked by the environment in the central region. There were different buildings and faces, many foreigners walking on the streets. I was therefore triggered to think about the contradiction between the mainstream and independency. I collected containers around the exhibition venue and my home just like a person of the past living without running water. People would place objects outside in the rain, any utensil they could find, to catch the life-giving liquid. We have different purposes though. I boiled the collected water but apparently it was useless due to the humidity. The act was an expression of my reverence to the sky. Rain drops fall thousands of kilometers to the leaves on the ground. The distance in-between, to me, represents massive natural power but we don’t really seem to care. I try to state my modesty. However, the ironic part is what I used to collect and boil the water. The utensils and the gas stove are products of our modern city, which is a consequence of over-development and capitalism. Essentially, I use what made it happen.

The first part “Before Rain” After talks about raining. The second part Before “Rain After” talks about the time after rain has fallen. I recorded the puddles along the way from my home to the exhibition venue to reflect the differences between skies of the countryside and downtown. Since the modern city is artificially created, fake nature and renowned chain stores occupy the streets everywhere. It is no longer possible to differentiate the two by only looking at parts of the whole. Furthermore, the shapes of the puddles interest me. The circulation of rain remains usual for millions of years, but the shapes and positions of puddles may change every year. The puddles temporarily exist in a specific time and space.

The performance included the boiling of the water in the windows and reflections of the puddles inside the well, one is a habit of looking at rain from the interior, while the window is split into pieces showing several channels of video altogether like a combination of various scenes. As if seen from the bottom of a well, they create a mirage that represents the absurd relationship between truth and illusion, towards our life and situation.

Your piece 'The Weak Are Meat,' satirizes the powerlessness of mankind with an individual’s lack of retaliation towards commercialization of society.” Please describe the piece and, what seems to be, your disappointment in mundane routines and a homogenous lifestyle.

In 2008, there was an exhibition about Hong Kong Food exhibited at the Hong Kong International Airport. It was a really difficult topic to deal with because in Hong Kong one can normally eat many different kinds of dishes. Finally, I came up with an idea to use packaged food. It is normal for families to eat these foods and also in offices. I began eating packaged food for one month and finally I lost weight. All the packages were used to make a sculpture in an acrylic cabinet. After the project, I began eating different kinds of packed foods at certain periods creating a habit to follow the mainstream.

Industrialization is the dominate structure of our surroundings, what we use, see and consume. Repetition can create trends and packaged foods can describe the real situation very well. If we reversely pack them, the sliver and white colors of the inner packaging match the industrial elements creating, to me, a poisonous sort of aesthetics. The forms are even beautiful but they are actually a waste of an excessive use of materials. There’s no way to reject their presence, however, as modern citizens cannot survive without being a part of the consumers. You dislike and you are a part of it, essentially acting as an accomplice. A well-planned and organized lifestyle often narrows imagination, providing the ultimate power of correctness which we call a preconception.

Many of your works use multiple channels of video in their installation. What is it that you find attractive about multiple videos working together within a piece?

I would describe my work as a kind of conceptually-based mixed media containing strong documentary elements. By appropriating daily objects, context and content, the creation experiment creates blind spots and hidden stories between life and art. The transformation emphasizes the process. The process may be regarded as performances, or more likely experiences, of how to connect with situations. Therefore, the outcome of the final presentation can partly reveal my concerns. To trace the artistic intention, ways of documentation are important, including writings, photos, sound and video.

Your work, 'Lower Legs,' describes that “collective constraints transform into laws” and uses constructed imitations of signs placed in the public space to highlight the “excellent concealment of day to day crises.” I can see that the piece amplifies the need to ask or read carefully, especially elements of our everyday landscape that often aren’t questioned. Could you please discuss your inspiration for the work and its potential to encourage critical analysis of our everyday environment?

This work exhibited in the show entitled “Do Android Dream of Electric Sheep,” questions the existence of our choices in real life.

It is natural to think of laws as a symbol of real controlling power. There is no exception to live without these laws in modern cities. We are taught to follow; we are told to learn; we are warned to avoid, etc. Families, schools, offices, society and countries set rules forcing one to behave. It doesn’t suggest that breaking rules is incorrect, but it destroys the possibilities of other ways of living. Moreover, the laws insert a rightness of value in part of our deepest mind of manipulated intuitive ability. The whole surroundings advise you to act properly while making it difficult to get rid of the box that reflects various aspects of our everyday environment. The laws have already been judged for you; it seems that there is no need to suspect the “truth.” While the laws are visualized, they are then turned into signs spreading over the town. To transform the content of the signs into everyday anxiety, this is a means of revealing hidden dangers.

Your piece 'A One-Man Factory,' in which you locked yourself in a recycling factory and documented yourself creating sculptures over a 24-hour period, one sculpture per hour, raises some really interesting questions that you highlight on the project webpage such as: “When art is converted into an assembly-line, do continuous and efficient production make creation become commercialized and meaningless? General daily working patterns are condensed into a whole day industrial activity. Does my mental state and behavior change over time? At the end of the road, 24 hours later, is the meaning of art completely drained? Or is there another way around from which one can derive new stories?” Following completion of the work, did you find answers to any of your questions?

One will probably start questioning the meaning of art creation during the process. If art is no longer about beauty, then what does it leave? Due to the condensed time period of production, where I produced one piece of sculpture per hour, though I tried to struggle against the repetitiveness and avoid being a machine. However, I cannot dissent. I gradually discovered my own pattern like software. The 24-hour act not only challenges your bottom line of knowledge, it also tears off the sacred coat of art to the ground like product. Hence, art should remain uniqueness of thoughts or techniques to reserve the value stay away from declining.

What are you working on currently? What can we look forward to?

I am now taking part in a residence program in Taipei. In addition, I need to finish a solo exhibition in August and several group exhibitions in the following half of the year. I am also curating a show at a gallery booth for next year Art Basel Hong Kong. I look forward to having my residence in New York next year and exchanging ideas with more people in Taiwan and more in other countries.